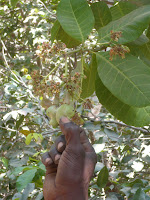 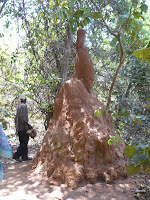 A trip to Makasutu Cultural Forest


The local taxi driver hardly new the place, but in the end we reached the Forest close to Brikama. After a welcome in a fairy tale like hang-out our guide took us through the Forest. He taught us a lot. How to make a rope from parts of the baobab tree, which fruits will protect you from malaria, which fruits to eat or not to eat (‘If it’s good for a baboon it’s good for human’), to use Mahoney wood for the matrimonial bed, how to climb a palm tree and more.

The marabout
After a walk of an hour we reached a place where an old man was sitting in a hut. ‘Do you want to consult the marabout?’ asked our guide. ‘Jessica, you know, I believe in these things. If I go for a long tour, first I go see a marabout. So I will be save on my travels. And you know, once a marabout told me I would work with white men. And see, I’m working with white men for quite a while already.’

A marabout working here in Makasutu Cultural (theme) Forest, where probably mainly tourist come…is that worthwhile? But what do people hear if they consult one? How does it work? I gave it a try. 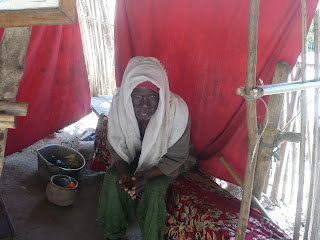 So I sat down next to the old man. The guide sitting down as well to translate. The marabout took my right hand in his. Then he attached a mirror to my fingers. It took a couple of seconds before I noticed this was not for him to look at my hand but for me to look at his face. Right away he started talking softly. ‘You will live a long and happy life’, translated my guide. Well something everyone likes to hear. ‘You have to do charity. You have to buy two banana’s, make a wish and give the banana’s to a man. Within a year you will get a husband and a son. Your son will be beneficial to you. Many people will know about him.’ ‘Wear a bracelet from mixed material to protect you from people talking bad about you.’ The old man made spitting sounds in my hand.  ‘Now put your hands like this, over your face.  Did you understand everything he said?’ asked my guide. Well he was very clear in his direction. Will two banana’s help? Or is it about doing good and receiving good? What goes around comes around?

It was my friends turn, but she changed her mind. ‘No, I don’t believe in it. But still I will get stressed and worried if I don’t do what he tells me to do.’

Charms
We continued our walk through the Forest. ‘Really, Jessica, you have to do this. I did not tell him you were not married yet (Our guide knew, cause as many others in the Gambia he asked me in the first 10 minutes). I will show you how the bracelet looks like. But don’t buy it here in the Forest. It’s less expensive at the market. I’ve got many juju’s.’ Indeed he had. We noticed as he showed us the three around his waist and almost took of his shirt to show as the one on his arm. ‘…and the one around my arm is made from Quran verses. Oh let me show you this giant termite hill’, the guide continued with his daily job. Teaching us more about Gambian nature and assuring us that the baboons walking around would not hurt us.

I see a lot of juju’s around me. Men, women and children. Muslims and Christians. Wearing them for protection or to help them get well. Not all Gambians though. One of the persons I interviewed: ‘These charms are cultural believe for protection. But why not trust in God? Some of them think without these things they are not protected. But who will give them protection? Something what a man has made?’ 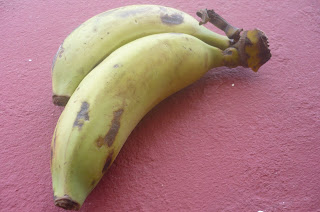 Two bananas
Well and what did I do? I did not buy the bracelet. But – just in case – I did buy two banana’s at Serrekunda market. It was hard to buy two, cause the lady was selling them three at a time. A coupIe of days later i made my whish and added the two banana’s while I gave some money to a blind man ánd an old woman begging. The marabout just might have meant woman instead of man. Because many Gambians use the words man and woman, he and she in an incorrect way. So hopefully the blind man and old woman enjoyed the bananas and maybe…who knows...i'll have something to celebrate within a year...
Geplaatst door Jessica Bouva op 12:07