Celebrating Gamo at the mosque 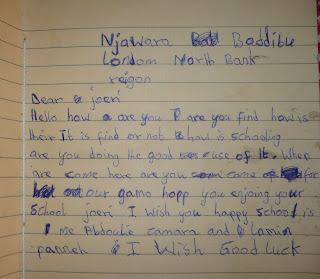 Inviation for Gamo celebration
‘What is Gamo?’ I asked while reading a letter from Lamin Pahne and Abdoulie Camara to their Dutch friend, Yoeri. Yoeri visited Njawarra in the Gambia with his family in December. Yoeri left a good impression playing soccer with the boys at Pa Pahnes compound in Njawarra. As soon as they heard I know him they asked me about him. ‘You can write him a letter’, I suggested. And so they did. ‘When are you come here? Are you come for our Gamo?’

Family gathering
Well Yoeri couldn’t make it for Gamo, but I could. So on Saturday February 30 a friend and I were carried to the boat to cross the Gambia River from Banjul to Barra. A local taxi ride and a bumpy ride in the back of a 4wheel drive later we arrived in the village up north. This second time in Pa Pahnes compound it was packed. ‘Welcome, welcome. Meet my family, almost 67% of them are living in Kombo, in the cities. They are all here now to celebrate Gamo, the birth of the prophet Mohammed.’

Like birthdays, Christmas and other celebrations it was a meeting of relatives, far away friends, neighbors and new friends. Like people told me in the interviews everyone was welcome to celebrate together. Although mainly Muslims live in this part of the Gambia. We chatted, drank ataja and baobab juice, shared roasted corn and a bowl of couscous with meat.

Waiting
Around 11 pm the program would start. We waited outside with the others on a mat – inside was too hot – and time past. Ten o’clock, eleven o’clock, twelve o’clock. I rested my head on one of the ladies laps to sleep a bit. I heard the women chat, one of the phones played some music and meanwhile my hair was plated. And then I distinguished a repetitive chant, different then the call for prayer, but with the same meaning. ‘Are you awake? Come it’s time to go to the mosque.’ Everyone fixed their clothes, the ladies put on their kala’s (head covers) and dressed me up in an African dress.

Ode to mothers
And so on a night where others passed on the light in church, I celebrated the birth of the prophet Mohammed in front of the mosque. Many woman – dressed in white or colorful dresses – on one side and many man – in smart suits – on the other side. The marabouts, imams and important men sitting in the middle. Three men were singing religious songs. Some ladies were singing along and others rhythmically snapped their fingers. Singing and swinging at the mosque! Frequently some ladies gave the singers some money. The organizer, imams and marabout spoke to the crowed. ‘We changed the directions of the chairs of the singers to face the women. Because you women are important. The mother of the prophet Mohammed (PBUH) gave birth to a strong man. All women can bring forth strong men’, spoke one of the marabouts. An ode to mothers! Another stated that men and women had different roles. ‘Women cannot become imam or pray together with men in the mosque.’ I did not hear the great marabout from Senegal speak about the life of the prophet, cause at half past four in the morning I could not keep my eyes open and could not stand any longer on my feet. At seven I woke up from people walking around. Pa Pahne greeted me a good morning. Was he already awake after organizing this event, welcoming everyone and being active at the mosque all night? ‘The program just ended I just came from the mosque. The bush-taxi is here to take you back. Many people already left.’ So we waved everyone goodbye. I think Pa Pahne was glad everyone left early. It was time for him to retreat to his room for the rest of the day! 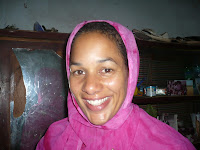